FOTO OTTICA CAVOUR, the contemporary parlor in the heart of Milan preserving photography and quality since 1983

A giant silver Leica conquers the central shop window, surrounded by new and used lenses, small tripods, digital and analogue cameras. Outside, next to the sign with which Foto Ottica  Cavour of via Fatebenefratelli is presented in the center of Milan, a few steps from the Cathedral and the alleys of Brera, the Leica logo welcomes professional photographers, including those who have made the stories like Berengo Gardin and Scianna, to amateurs looking for advice, to curious people who look out into the world of photography. To welcome them, crossed the threshold, there are the kindness and availability of Nicolò di Benedetto and his brother Federico, who followed in the footsteps of their father Gianni, transforming his passion into a family affair. 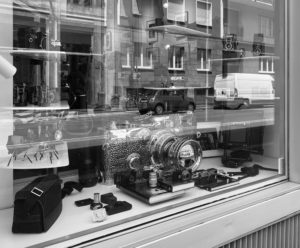 Foto Ottica Cavour was born in 1983 and already from that year it sells Leica, the leading German brand in the sector of which it became the first boutique in Milan in 2013, even before the Leica Galerie was opened in 2014. From 2019 it also sells bags by Federico Serrani, together with a few other selected brands that stand out for their absolute quality. “At the beginning,” says Nicolò, “Foto Ottica Cavour was mainly an eyewear shop, which we still sell in a dedicated store in via Turati. I started working here to help my father while studying optics and optometry at the university, which I then abandoned to work full time, ending up as a privatist. “He tells surrounded by objects: on one side the showcase that contains vintage Leica, including that of his father Gianni, and exhibits the black and white photographs that portray him embraced by two younger Berengo Gardin and Scianna; on the walls of the shop, their original signed shots hung like a small museum: the famous “Venice in Vaporetto”, from 1960 by the photographer born in Santa Margherita Ligure and who will celebrate his ninety years in October this year , or the portrait of a splendid Ines Sastre, taken 30 years later by the Sicilian master. A little farther on, between the shelves full of films of all kinds and the other “tools” of the trade, two photographs by Giacomelli, recognizable from afar thanks to their contrasts and graphic elements. 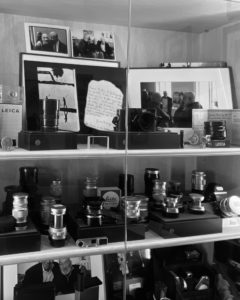 “Sometimes” says Di Benedetto, “we also hang photos of some customers, organizing small exhibitions with them: we like to give this opportunity and create opportunities to experience the shop from another point of view, giving life to a little movement. ” In the last 10 years four other employees have joined the two brothers, while many other Milanese stores have closed their doors, thanks to the period of crisis of the film following the advent of digital machines, and, again, of smartphones, which have brought down the compact camera market. What’s the secret? “First of all, keep working hard. Family management has certainly helped us, together with the fact that the walls are ours, especially in a year like 2020. ” According to Di Benedetto, it is worth, and there is no shortage of consumers who realize it, to spend a few more euros in the store, in exchange for a care and technical advice that in online purchases is completely lost and that for the buying a camera, more than any other product, is essential. “We are also trying to convey a little culture here. Each of us in here has its own peculiarities and knowledge. My father started doing this job when he was 16 and still there are those who look for him after years because he trusts him, or asks for Claudio, the other icon of the shop and one of the best sellers in circulation who works with us for over 10 years. “

And then, again, it rewards having remained a point of reference for analogical  photography, because, as Di Benedetto says, there has been an incredible return of the film, with the Millennials and the youngest in particular among the buyers, that is “Those who born with digital the film for children have almost never seen it, despite being much more expensive, between film, development, scanning. But the quality that gives the film, with its imperfection, is what kids are looking for today. This world is recovering as we never imagined and I believe it will continue like this. ” Another fact that could amaze, and that has not gone unnoticed, is that the new generation of photographers is made up of an ever-growing number of girls, who outnumber their peers. Compared to only a decade ago, when it was a rarity to see a woman in the shop, it is a remarkable change. ” This probably opens up the prospects for a new market of accessories dedicated to photography that offer not only the functionality that a photographer needs for work or travel, but also an equally refined quality and design. “I believe that even for a brand like Federico Serrani, which we have also chosen to exhibit and sell,” says Di Benedetto, with an eye now trained to read the market, “there will be more and more space.” This new generation of photographers has already conquered the scene and finally, as happened in many years in many professions, open to female creativity and gaze, promises to rewrite the rules.